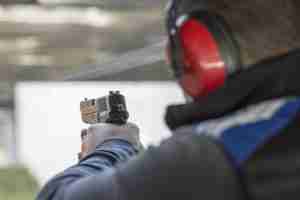 This is the next post in our series on how one can maintain their firearm rights after having been charged with a crime in Arkansas. Our last post provided an overview of topics we will be discussing and stressed the need to retain counsel if you have been charged with a crime. In this post we will discuss the preservation of one’s rights through the fighting of a charge.

Both Arkansas and Federal law prohibit the possession of a firearm by anyone who has been convicted of a felony or of domestic violence. The Federal provision, USC 922, applies throughout the country. In other words, if one is convicted in the state of Arkansas then they will not be permitted to possess a firearm anywhere in the Country. To do so would constitute a Federal offense. The key to understand is that one is prohibited from possessing a gun after having been convicted of an offense. Simply being charged with an offense will not lead to a permanent loss of one’s firearm rights. This means that a defendant, who successfully fights the charges, will be able to own and posses a gun after the case has ended.

There are multiple ways in which one may defend against a criminal charge. The first involves getting a case dismissed, via motion practice, due to search and seizure issues. These types of matters may include a drug case where the police violated one’s Fourth Amendment rights, a case in which a confession was gained in violation of the Fifth Amendment, as well as other situations. The second way in which a case may be defended is to gain an acquittal at trial. This involves entering a plea of “not guilty,” seeing the case through to completion, and receiving a favorable verdict at the end of the matter. We cannot stress enough that any form of criminal charge should be taken seriously and that you should contact a criminal defense lawyer sooner, rather than later, after having been arrested.

Our Little Rock attorneys have over twenty-five years of combined experience in defending the accused throughout our state. Once retained we will immediately begin work on your case and will stay in regular contact with you throughout the case. Contact us today to speak with a lawyer. In addition to Little Rock, we also handle matters in Fort Smith, Fayetteville, Springdale, Jonesboro, North Little Rock, Conway, Rogers, Pine Bluff, and throughout the rest of Arkansas. Contact us today.