How The Use Of A Firearm Impacts Other Charges In Little Rock, Arkansas 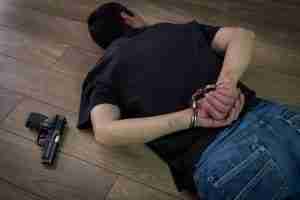 This is the next post in our discussion on the handling of Little Rock, Arkansas criminal cases involving firearms. Our last article discussed how search and seizure issues impact gun cases. It is important to understand that if the police violated your rights during an arrest then it may be possible to have the charges dismissed. Arguing for a dismissal will involve complicated legal issues and it is important that you retain a criminal defense attorney experienced in handling such matters. In this post we will discuss how the use of a gun can impact other charges. If you have been arrested then contact our office today to speak with a lawyer.

Arkansas is like other states in that the use of a firearm can “elevate” other charges to a more serious level. For example, a defendant who has been arrested for domestic violence will typically either face misdemeanor charges or a low level felony. If, however, a gun was used to threaten the victim then the defendant will be facing “aggravated” charges which involve much deeper penalties. A conviction could result in a substantial prison sentence and other harsh consequences. Other examples of how offenses increase in severity can include when one commits a burglary while carrying a gun, using a weapon while carrying narcotics, etc. Any of these instances will lead to the accused facing more severe charges than they would have otherwise.

It is important to understand that charges stemming from possessing a gun can be “stacked” on top of other charges. An example of this could be a person who is carrying an unregistered firearm and also is caught with heroin. This person will potentially face drug trafficking charges but can also face a separate charge based on the fact that the gun was not registered. If convicted on all counts the Court may run the sentences consecutively. This would mean that the accused would have to serve the time for the first count before any time begins to be credited towards their second count. This is just one reason why gun-related charges can lead to lengthy prison sentences.

If you or a loved one have been arrested then contact our office today to speak with a Little Rock lawyer. We have extensive experience in handling such cases and we are ready to assist you. We also handle matters in Fayetteville, Fort Smith, Springdale, Jonesboro, North Little Rock, Conway, Rogers, Pine Bluff and throughout the rest of the state.