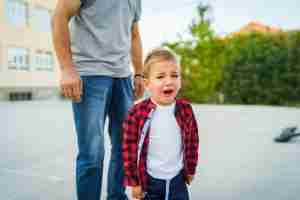 This is the next post in a series of articles discussing specific circumstances in which a parent may seek an emergency change in a child custody order in Little Rock, Arkansas. Our previous post provided an overview of the topics to be discussed throughout this series. It also encouraged anyone facing a situation in which their child may be in danger as a result of actions taken by their co-parent to contact a child custody attorney as soon as possible. Your child’s safety is of the utmost importance. If you need assistance with an emergency custody issue, contact our office today to speak with a lawyer.

If a parent is engaged in criminal activity, it can create a dangerous situation for a child and potentially justify an emergency modification to an existing child custody order. For obvious reasons, if the criminal behavior occurs in the child’s presence, the child may be exposed to a dangerous situation and placed at risk of imminent harm. For instance, if a parent is buying or selling illegal drugs or robbing someone with the child present, this will most likely justify an emergency change in child custody. Criminal or illegal activity that occurs outside of the child’s presence or is not inherently dangerous will also be carefully evaluated by the Court. Whether or not such actions create a safety risk for the child and therefore result in an emergency custody modification will depend upon the specific facts of each case. For example, if the parent commits a violent crime, such as domestic violence, armed robbery, or assault and battery, the Court may determine that their access to the child creates a safety concern and should be restricted. If, on the other hand, a parent is arrested for an outstanding traffic warrant, this would not likely be considered an emergency situation in the opinion of an Arkansas Judge.

The initial step for a parent seeking an emergency custody change is to file a Motion with the Court. Because such matters require prompt action to protect the child, the Court will generally schedule an expedited hearing to review the request. The hearing will normally occur after the other parent is provided with at least one day’s notice. The Judge will review information presented at the initial hearing to decide whether the current custody order should be revised on an emergency basis for the child’s safety. Depending upon the facts, a Judge will rule in one of three ways. The Judge may issue a temporary custody change order pending a future hearing to determine a more permanent arrangement. If the Court determines that no emergency exists, the Motion may be denied in its entirety, the matter closed, and the existing custody order remains in place. Alternatively, the Court may allow the current custody order to stand but schedule a trial for a later date. If the parent’s criminal activity has led to an arrest and incarceration, the Judge will likely issue an order granting custody to the other parent pending the outcome of the criminal charges.

Our Little Rock lawyers are experienced in family law and custody modification cases and are ready to assist you. We also handle matters in Fayetteville, Fort Smith, Springdale, Jonesboro, North Little Rock, Conway, Rogers, Pine Bluff, and throughout the rest of Arkansas.