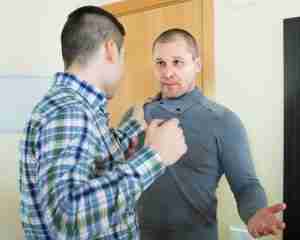 This is the next post in our series on Defending Against Allegations of Domestic Violence. Our last discussion explained what type of conduct will constitute domestic violence in Arkansas. In this article we will discuss the types of steps your attorney can take to defend your interests. If you are charged with this offense then it is crucial that you contact an attorney immediately.

It is important that your attorney immediately gain a larger understanding of the facts of your case. The first step a criminal lawyer will take in a domestic violence case is to obtain what is known as the “discovery” from the prosecution. The discovery will include the police reports, witness statements, any photographs taken by police, as well as any physical evidence collected at the scene. This allows your lawyer to immediately know what the police claim to have found upon their arrival and to see what the victim told the police; the person accused is often surprised to find out the extent to which a victim paints an ugly picture to law enforcement.

Once the attorney has gained the discovery they will often visit the place where the incident occurred. Actually seeing the residence, or other location, will often allow your lawyer to gain further insight into the situation and may raise additional questions that the attorney will investigate. In addition to visiting the scene of the incident, a skilled domestic violence defense lawyer will interview any relevant witnesses so that all necessary testimony can be presented at a trial.

Another type of situation which arises in domestic violence cases is when one makes a confession of an offense to the police. There are certain rules and procedures that the police must follow in order for a confession to be used in court and people can be surprised at how often the police fail to follow these rules. If the arresting officers have violated your right against self-incrimination, or if it was subsequently violated at the police station, than a Motion to Suppress may possibly prevent any obtained statements from being introduced in Court. This can very well make the difference in your case.

Having an attorney who understands the Fifth Amendment’s protections against self-incrimination is important in any criminal matter. This is especially true in domestic violence cases where it is often one person’s word against another’s and the admission of a statement may destroy the accused person’s credibility. It is imperative that your lawyer be prepared to defend your Fifth Amendment rights.

Contact our Little Rock office today if you require the assistance of an Arkansas domestic violence lawyer.