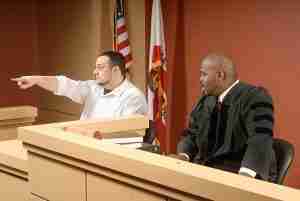 This is the next post in our series on the handling of violent crime cases in Little Rock and throughout Arkansas. Our last article discussed the process for excluding an eyewitness identification from being offered in open court. As we explained, eyewitness identifications may be excluded when they are the unreliable result of suggestive police procedures. In this post we will discuss how one’s defense lawyer can challenge the reliability of an identification at trial in the event that it was not previously excluded. We cannot stress enough that one should contact a criminal law attorney immediately if they have been charged with an offense involving violence.

Many violent crimes hinge on the use of eyewitness testimony at trial. Such matters include those involving assault, battery, domestic violence, and others. In many instances the only evidence which links the defendant to the charge is the victim or witness being able to identify the accused in Court. Such identifications, however, are often suspect and unreliable. These may be due to a witness having a poor vantage point from which they viewed the accused, the fact that the witness may have been otherwise distracted while viewing the event, as well as other circumstances. It is a sad but unfortunate truth that, while a defendant is entitled to the presumption of innocence, jurors are often willing to convict an accused solely on the basis of a suspect eyewitness. Defendants facing such a situation require the services of an experienced trial attorney and should seek immediate representation.

There are many steps which one’s lawyer can take to protect them from being convicted by a questionable eyewitness identification. When cross-examining the witness, one’s attorney can raise all the issues which make the ID problematic. Examples of this include confronting the witness with their viewpoint having been limited by distance, weather conditions, etc. Other examples of how a witness can be challenged include getting them to admit that they, in fact, did not get a good look at the suspect or that they only viewed the suspect for a brief moment. Witnesses are quite often sure of what they saw (even if their memory is inaccurate) and they typically do not want to surrender their belief while on the witness stand. Having an attorney who is familiar with challenging an eyewitness is, therefore, crucial to any criminal defense case.

Our Little Rock criminal defense firm assists Arkansas residents charged with having committed an act of violence. Patrick Benca has a long history of taking cases to trial and we are proud of the results we have achieved on behalf of our clients. Contact us today to schedule an initial consultation. We also handle matters in Fort Smith, Fayetteville, Springdale, Jonesboro, North Little Rock, Conway, Rogers, Pine Bluff, and throughout the rest of Arkansas. Contact us today.